A few weeks ago, I was lucky enough to unearth a piece of history that gave me such emotional feeling, I was virtually speechless. I was overwhelmed. My muscles went weak and my breathing got heavy. I started to feel a little lightheaded. 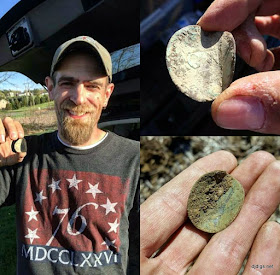 This was most likely a once-in-a-lifetime find for me.

Now here's the funny part: I was hunting with my buddies Mary Shafer & Cody Zimmerman. We were detecting one of my old sites that I've been hitting for over 5 years now. 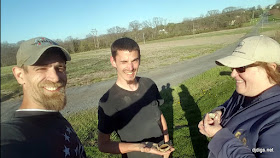 I started off in the yard and surprisingly, I dug a beautiful silver thimble. 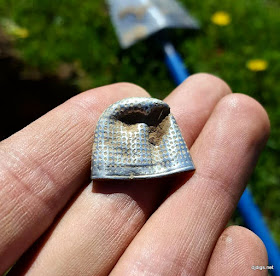 It's not marked but to me it looks Colonial period. It was 10" deep and I was using my MXT All-Pro with the Ultimate 13 coil. (There was a large iron nail in the same hole, I think that's why I probably passed it over so many times before.)

Cody went down to hit a different section of the field that we haven't spent much time in before. Moments after I dug my thimble, he dug a large copper down in the field. So after a few more minutes in the yard, I decided to go down and hunt with Cody.

I went a little further out and then made my way closer to where he was digging, swinging my coil all the way. I got within 25 feet of Cody and I got a great signal. The VDI was coming in at a solid 40 on my MXT.

I dug the target out of the ground and my eyes instantly lit up. I thought I'd found a big 'ole dandy button. I didn't know what I actually had.

Cody heard my reaction and asked what I'd found. I was JOKING, honestly, when I glanced at the dirt covered button and said, "Check it out, it's a GW."

I handed the button to Cody and he wiped it off. I saw his eyes almost bulge out of his head. He said, "DJ, it is."

Now Cody and I joke around a LOT when we hunt together, but when I saw the look on his face and heard the tone of his voice, I knew he was serious.

So many things were going through my head, but all I could get out of my mouth was, "Wait. What?"

Again, Cody said, "No really. It is. I can see the GW plain as day in the middle."

Now is when that overwhelming emotional feeling hit me hard. I could imagine the history and had so many questions. Who wore it? How did it get here?

At this point, I hadn't really even looked at it closely. I'd been pacing in circles trying not to pass out. I had to see this thing and I had to hold it.

Once it was in my hand, I just still couldn't believe it. I never would have thought I'd find something as significant as this. I was so glad to be able to share the experience with my closest friends, Cody & Mary.

To my knowledge, I'd never heard of another one coming out of the Lehigh Valley.
I'm honored to have found this piece. I have a great respect for its history and it will become a treasured part of my collection.

Like I said, I'd hunted this site for over 5 years. But that's another thing I love about this hobby. No site is ever truly "hunted out." That one signal could be the missing target with an incredible find. You just never know. 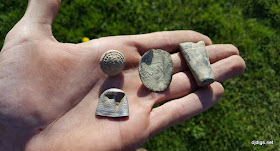 These were my total finds from the day.

Earlier that day, I saw that someone had found a gorgeous GW button in Connecticut. I didn't think much more about it and went on with my day.

After the excitement of finding my own button, on the way home I noticed a friend from NJ had called and I missed it. By the time I got home, he'd texted me pictures. He had found a GW button just after I did! His too was a different style than the one I found and the one that was found earlier in the day.

So we connected on social media. The button found in Woodstock, Connecticut was found by Brian Bari. He's only two years into the hobby - this find is gorgeous! He was running a White's MXT with the 10" D2 coil. He dug his GW button at a virgin Colonial cabin site. It was about 5 inches down. 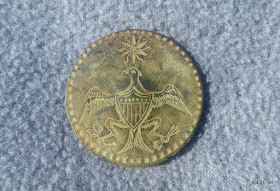 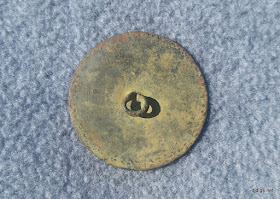 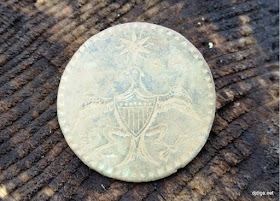 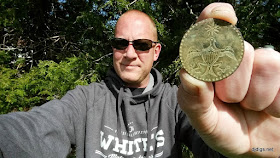 The button found in NJ was found by my friend John DeRosa. John's been detecting since 2003. He was using the DFX 300 with the 12" stock coil. It was only about 2" deep - in a field in Warren County.

John's story is the same as mine! He didn't know what he had - he thought it was a dandy button. He saw I posted my GW on facebook. When he got home and cleaned up his button, he couldn't believe his eyes! 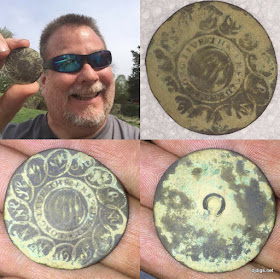 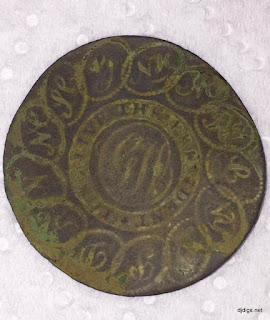 What are the odds? That is unbelievable to me. 3 different George Washington buttons, different styles, found on the same day, hours apart.

You probably know how much I love White's Electronics and I'm very proud to say all three of us were using White's machines.

We talked afterward on social media. It was truly an amazing experience and I know the same feelings were shared by Brian and John.

That day was one for the books for sure. Great finds, shared excitement, and detecting with friends both in person and via social media - it just doesn't get any better.