I recently attended a large group hunt in Horsham, PA, called Digging In PA (DIPA). My friends Cody & Seth were also invited. Since it was only an hour away, we planned to drive back & forth each day. 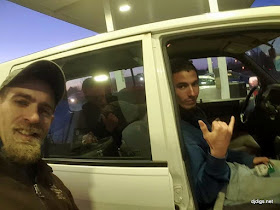 Always great conversation in a car full of diggers on the way to a hunt.

You never know what to expect going into these events. I learned early on to simply go for the experience. The finds are just a bonus.

My favorite aspect of these hunts is to meet all the people I've interacted with on social media and to make new friends among fellow detectorists. 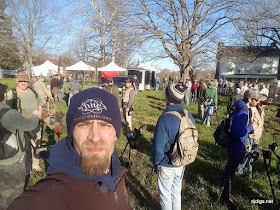 Depending on the theme of the hunt (this one was Colonial/Revolutionary War), people will travel from all over to participate. This one even drew out some of the southern relic huntin' boys.

It was nice to meet Beau Ouimette & Michael Bennett (finally). I met a bunch of other people that I've been following for a while.

I'd like to thank George Savino for organizing this event. He put it all together and really did a great job. 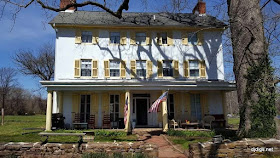 The site George lined up for us was a standing 1722 house with an overlapping home built in 1810. The surrounding fields were once known as an encampment for a few weeks during the Revolutionary War.

I told Cody & Seth on the ride down that I wasn't even looking for a Rev War relic, I wanted to find a half cent.

I did the best I could and hunted hard for two days. I did manage to get my coil over some good targets...

On Day 1, I started off within 100 yards of the house. I had to wait until about 25 people cleared out of the main section of the yard. That's the area I was REALLY interested in.

It didn't take long before I got a faint, deep signal. I could hear the iron in there - it was everywhere, but there was still a faint high pitch, which was enough for me to investigate.

I dug the target 10" down and lo & behold, I saw a disc that could be my first half cent.

Cody was about 15 feet away and came over to check it out.

We have this thing that whenever one of us finds something killer, the other does the ID & reveal. So I handed my find to Cody. It took him like two minutes but it seemed like an eternity. Then he told me I did it. I finally got one. 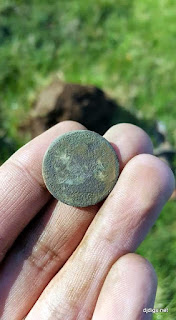 What a feeling to dig something you've chased for so long. To finally have it in your hand is incredible.

I was psyched! My day was made and I'd only been there an hour.

Later on that day, I also managed to get my coil over a dropped musket ball that was definitely from the Revolutionary War. 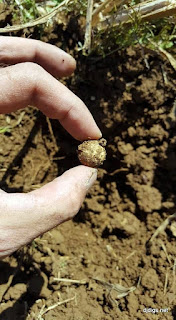 I found a few other neat relics and before I knew it, the day was over. We packed up and hit the road.

The next morning came quickly, but we were ready to go at 5 AM. Seth, Cody & I were all packed and ready to hit the road.

This time we came up with a game plan since we knew the layout of the site. We decided to stick together and investigate a field that didn't see much action the day before. 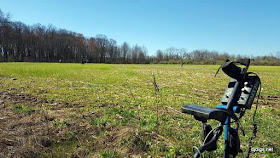 We were there for probably 30 to 40 minutes. I dug a few pieces of lead. The targets seemed few and far between.

I got a real iffy signal on my MXT, but out in this field, I was digging everything anyway.

I couldn't believe it when I flipped over the plug and saw a thin, tiny silver disc.

I laugh to myself every time I think about it, but after not getting a solid target for so long, and then seeing this tiny coin which could be anything in the hole, my reaction was to shout, "COIN!!!"

About seven other diggers whipped their heads around and everyone swarmed over to my location. It was awesome. 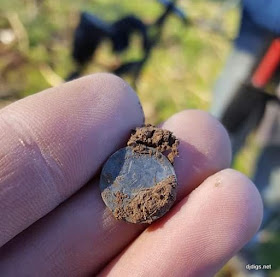 My buddy Sean caught the moment on film... 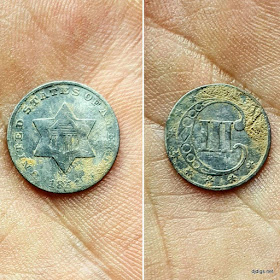 These coins are amazing - I've always loved their design. The actual purpose back in their day was to purchase a postage stamp with one coin. But they were so tiny and thin, people tended to lose them. 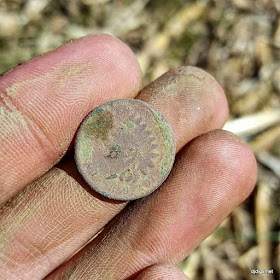 Later that day, I also ended up finding an 1859 Indian Head penny, a lead bale seal, a top to a Colonial pewter spoon, part of an old change purse (empty, of course) and a few other odds & ends. 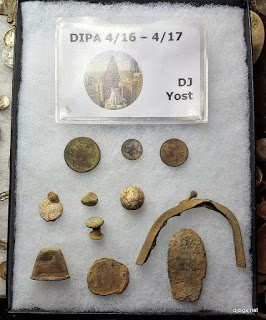 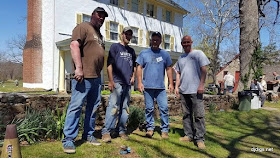 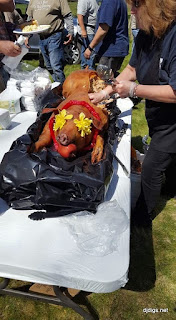 This was one of the best events I've been to. It was organized, went smoothly, there was no drama or BS at all. We even had a pig roast! It was a great time.

White's Electronics was nice enough to donate an MX Sport and other items for a raffle that benefited the restoration of the Colonial homestead.

White's also made a video of the hunt,


and a short highlight video featuring myself.


Thanks for reading and keep on digging.